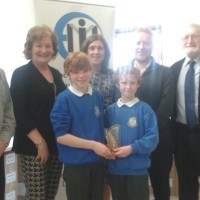 By Scoil Eanna on 5th April 2016 in Latest News

The pupils of 5th and 6th class took part in a project competition about 1916, Our Local Area.  Each group had to complete a video, diary entry or similar project based on Monaghan’s link to 1916.

We decided to do the project together.  After some googling, we came across a quote that Heather Humphreys, Minister for Arts, Heritage and the Gaeltacht, had used from a letter sent by a Magheracloone girl to her parents after the events of Easter 1916.

We made a video where we combined present and past – the modern host of the History Channel interviewed the 18-year old Katie McGrane who had worked in the GPO at the time of the Rising.  We also included a scene where Katie’s parents received the letter from Katie about the Rising.

We submitted our entry which Miss McDermott edited and entered it into the Monaghan Education Centre competition along with many other entries.

We were delighted to hear that our project had won 1st prize in the 5th/6th class category in the Cavan/Monaghan area.  We were invited, along with our parents and our Principal, Mrs Flanagan, to a presentation ceremony in Monaghan Education Centre where we received a special 1916 commemorative trophy for the school.

By Ruadhán and Conor Curran