You are here: Home › News › March and April News 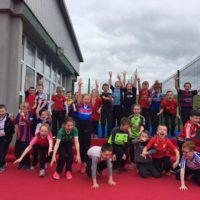 The girls in 6th class had a soccer tournament and they had training with Mrs Woods. After they were done with their training they had a match on the 24th of March. They played in Monaghan and they played against three teams. The first game they lost by 2-4, the second game they drew by 1-1 and the last game they won by 3-2. The girls were proud of themselves because that is the best the girls have done in a few years. 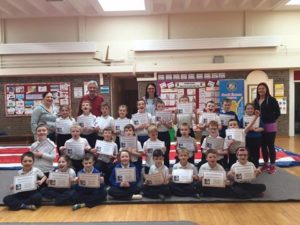 The school provided gymnastics for 1st to 6th class pupils on Fridays. The second block for 4 weeks commenced on the 3rd of March. They did most of the same gymnastic skills but there were some new skills. Then when  the 4 weeks were over all pupils   got certificates at the beginning of April.

The school got a new mission statement poster that has a child on it and has words on the poster and around the poster. The words describe the children in the school. The child looks very happy and excited. 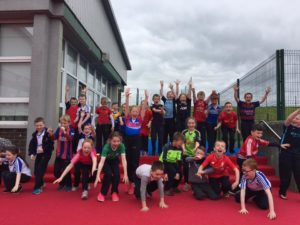 Scoil Éanna pupils of first and second classes played a blitz in March. They played a number of schools from the south side of Monaghan. It took place in Carrickmacross

On the 21st of March active school week started. Junior Infants up to 6th class did an activity one time a day. Sometimes they went down to the park and did a lap or 2. After the run down the park all pupils went up to the yard and did a small circuit training course.

On the 16th of March the school celebrated St Patrick’s day and to  mark the occasion everyone had to wear something green.  This was the final event of  Seachtain na Gaeilge and the start of a long weekend.

6th class went to St Joseph hall in Monaghan. The Retreat was a chance for them to meditate. They made French bracelets and they played some games. At break time 6th class students went around Monaghan town for a walk. Then when they came back they all meditated. At half two the 6th class pupils went back to school.

On the 19th of March Father La came in to celebrate Saint Enda’s day. The school celebrates Saint Enda’s day because Scoil Éanna is named after Saint Enda. Father La asked the students some questions. The pupils from 1st to 6th sang a song called Saint Enda and also sang it in Irish.

6th class had a pj party. They earned this prize by doing the work and not messing. They filled 20 stars. On Thursday the 16th of March 6th class brought in their pj’s and lots of sweets. As their treat they watched the movie jungle book.

5th class took part in the annual FAI soccer fun 5. It took place  in the home ground of Monaghan united. They played well but they lost both of their games. Their coach was Mr Duffy.

During the Easter holidays the back of the school got new plants. There were five different varieties planted. There will be an opening day for the yard on Wednesday 30th of May as the planting was the final part of the yard to be done. 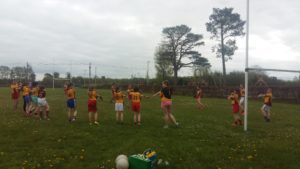 irls have started 11 a side football league. The training is on every Wednesday at 3pm to 4 pm. They have played Killanny in Killanny on the 28th of April. It was a really good game and both teams played very well. The girls put all they could into this game to win their first match. Near the end it start to get really hard until the girls got the ball and ran up the filed with it and put it into the back of the net. After   all Scoil Eanna had won their first game against Killanny.

6th class girls took part in a mini sevens tournament at the beginning of April. They played Latton, Corduff and Loughmourne. All teams had played very well. Sixth class girls had won all of their games and got through to the next round. When the girls got to the next round it was a lot harder and they came up against more difficult teams. The girls did well but it wasn’t to be on the day.